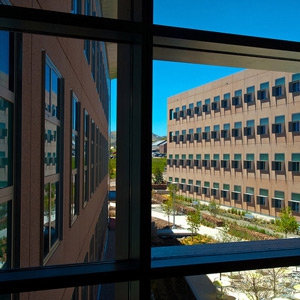 Understanding Air Exchange (infiltration and exfiltration) as Related to Windows, Doors and Skylights

There are three basic parameters that describe the thermal performance of fenestration product: air infiltration, thermal transmittance and condensation resistance. Air infiltration is important to the total building energy performance and is usually considered separately from the other two thermal characteristics.

To some extent, every building, regardless of age or location, needs to “breathe.” You may feel some air coming in around windows, doors, skylights, electrical outlets, walls, floors or the roof. This is air infiltration, and it is the result of air pressure differences between the inside and outside of the building. This can be caused by wind, pressure differences between floors in taller buildings or other reasons. Every building has some level of air exchange. Glass or frame surface temperature, by itself, is not an indication of air infiltration.

Air exfiltration is due to the interior of a building having a higher pressure than the exterior. This can be a designed HVAC feature to assist with building air exchanges, which improve the indoor air quality. It can also be caused by “the stack effect” in tall buildings or in buildings with skylights. Since buildings are not completely air tight, there will be both air infiltration and exfiltration as a result of air pressure differences around and in buildings.

This can be more noticeable with colder exterior temperatures during the heating season. When the interior air on lower levels warms and becomes less dense it will rise to higher levels. This increases the air pressure (positive building pressure) on the upper levels, which leads to air exfiltration, while decreasing the air pressure (negative building pressure) on the lower levels, causing air infiltration. Additional reasons for variances in air pressure may be from wind due to the buildings location, orientation or design.

Different types of products allow different air exchange rates. For example, fixed products – those that do not open (such as a picture window or curtain wall) – are typically the most airtight. Those that do open, like casements (commonly referred to as crank-out windows), operable skylights or double- or single-hung windows that open vertically have more potential for air infiltration. Projecting windows, skylights and doors open in or out of a building. They have compression type seals which generally allow less air exchange than sliding seal products. Sliding windows which operate either vertically or horizontally, and doors generally allow the most air exchange. This is due to design trade-offs that allow the products to open and close using reasonable effort.

It is recommended to keep windows and skylights closed and locked when not being used for ventilation. This will help reduce air exchange to keep your building warmer in the winter and cooler in the summer, and allow the HVAC system to properly operate and be balanced.

Building location and climate can impact air exchange. It’s important to select the right type of windows, doors or skylights for the building’s climate conditions and to install them properly according to the manufacturer’s instructions.

Different placement of products throughout the building allows for varying air exchange rates. For example, a window placed on a north wall facing harsh arctic winter winds should have different qualities to help protect from the cold winds as compared to a southern-facing window overlooking a sunny beach. A skylight, because it is roof mounted, is also impacted by location as well as the slope of the roof surface on which it is installed.

No single product design is best for every application. Depending on the direction a wall or roof faces and the local climate, windows, doors and skylights may need to be different from one area to another within a building.

Check with the manufacturer to see if a sample of the window, door or skylight has been tested to determine if it meets industry requirements for air infiltration or exfiltration. To pass this test (as detailed in the industry standard - AAMA/WDMA/CSA 101/I.S.2/A440), a commercial product must not allow more than 0.1 to 0.3 cubic feet per minute of air to pass through every square foot of the opening the manufactured product fills, under prescribed pressure differences, depending on product type and performance class.

At an accredited test laboratory, a new AW, CW or skylight product sample is subjected to constant air pressure to simulate a specified wind pressure, which represents a time-averaged weather condition. Since air flow depends upon temperature and barometric pressure, these are taken into account to determine total air leakage. It is important to note that performance results from a test laboratory may differ from an installed performance level due to variances in installation practices, age of the product and the degree which routine maintenance may have been performed.

Water penetration resistance testing in the lab is conducted much the same as described above for air infiltration testing, but with the addition of a calibrated spray rack, which applies water to the surface of the test specimen product at a rate of 5 gallons per hour per square foot, exceeding any rainfall rate ever measured in a natural storm. However, this high application rate is intended only to maintain a film of water over the entire surface of the product. It is the air pressure differential, simulating wind pressure, that will force water through any potential leakage points at seals or operating joints of the window. For CW products, the air pressure differential across the product must be 15 percent of the Design Pressure associated with the product’s Performance Grade; for AW products, this figure is 20 percent. In the U.S., this pressure is capped at 12 psf; in Canada, the cap is 15 psf. The way in which the differential air pressure is applied varies with the Performance Class. CW products are tested under cyclic static pressure, while AW products are tested under both cyclic static and uniform static air pressure.

To determine thermal transmittance and condensation resistance of a product, testing can be performed in a special chamber called a guarded hot box under standard steady state and repeatable interior and exterior test conditions. Certifiable ratings, however, must be determined by simulation methods validated by U-Factor testing. To compare various products, there are standard test sizes. Thermal transmittance is more commonly called U-Factor. The U-factor is the appropriate way to quantify a fenestration product’s insulating value, because it consists of several different materials and air films. The U-factor is defined as the rate of heat flow through an assembly. For a homogeneous material, U-factor is the reciprocal of R-value (resistance to heat transfer); that is, mathematically, U=1/R, and R=1/U (“U equals 1 divided by R, and R equals 1 divided by U”). Except for the U.S. Department of Energy’s marketing of “R-5” windows to consumers, the thermal performance of fenestration products is always indicated by U-factor. The lower the U-factor the better.

Field testing for air infiltration can be performed on most fenestration product types. This typically requires access to both the interior and exterior of the product. A pressure chamber is usually constructed on the interior side to simulate the same test pressure or simulated wind velocity of a laboratory test. The exterior of the product is usually sealed off to allow for determining the air leakage of the pressure chamber. After this is done, a second reading is taken with the unit unsealed to determine the air leakage of the fenestration product. For newly installed fenestration products, allowed field air leakage or infiltration is normally one and a half times the amount allowed in controlled laboratory conditions.

The materials around the perimeter of the fenestration product and their interface can also be significant sources of air infiltration. It may be difficult to determine the amount of air infiltration if the interior finishing work has been completed.

In addition, field testing for water penetration can also be performed using a similar chamber. For field tests the chamber pressure is allowed to be reduced to two-thirds of the pressure specified for a laboratory test.

To learn more about the structural properties of architectural products, visit the Structural Attributes page.